This morning at 6.45 h. European time the solar car Nuna9 passed the finish line in Adelaide in pole position during the Bridgestone World Solar Challenge 2017. The Nuon Solar Team took four days and six hours for the 3,000 kilometer race from Darwin to Adelaide. AOC is the innovation partner of the Nuon Solar Team. The construction and outer shell of the Nuna9 have been manufactured with styrene-free Beyone™ resins from AOC.

COPING WITH THE WIND

On the first racing day, weather conditions were pretty good with plenty of solar radiation to catch. The Nuna9 has a relatively small surface of (high efficiency) solar cells. This allowed making the car significantly smaller and lighter than the cars made for previous editions. But after a windy racing day on Tuesday and a night with heavy rains, yesterday the team had to cope with stormy weather. Wind speeds exceeded 60 kilometers per hour, while the sky was often covered with heavy clouds. Driver Emma Vercoulen tells: "Because of the strong wind it was not easy to keep the Nuna on the road and follow a perfect line. I felt the car was shaking under me, while I tried to avoid the rain puddles on the road. Pretty scary, but also very exciting!" 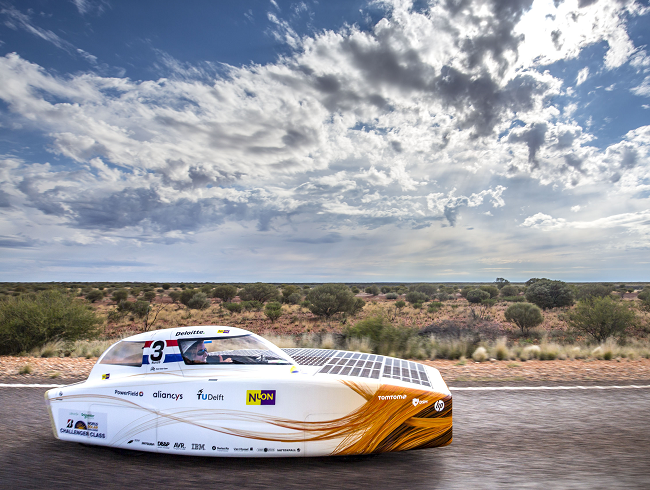 In order to ensure the Nuna driver is safe, the Nuon Solar Team decided to decrease speed where needed. In spite of this lower speed the team still managed to maintain its first position in the race. The students contribute this to a large extent to their strategy. Strategist Stijn Burger was working with his laptop in Mission Control, the car behind the Nuna "In Mission Control we keep a close watch on the car condition and the actual weather. Today we have especially monitored the wind as well as the clouds above the road. By driving slightly slower when there is sunshine, the Nuna can capture more sunlight. Then, when there is a cloud the Nuna can speed up and get through quickly.”

On the last racing day the Nuon Solar Team further strengthened its position over the main competitors – Michigan (USA), Tokai (Japan) and Punch Powertrain (Belgium). Driver Sharon van Luik comments "Of course we were nervous. There is always something happening in a race like this. We were anxious to reach the end of the race and keep the Nuna9 on track. I can only say it went super: today we managed to reach the maximum speed of the Nuna9 of 110 km/h, just with the help of sun power. It was great!" 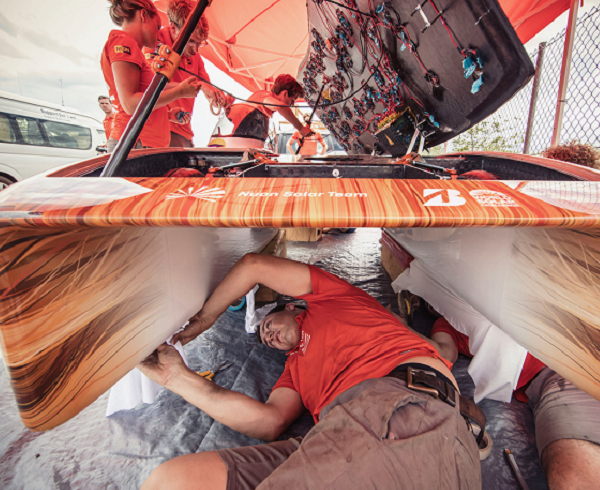 It was the 9th time that the Nuon Solar team participated in the race. The team already won 6 times before, and took the second position twice. Still the team members had to keep nerves under control, explains team leader Sander Koot. “Because of the new game rules, the participating cars are very different in design. No one knew which team would be the best to cope with the new rules. Fortunately, our choice for a compact design and for using Gallium solar cells turned out to be very right.” The construction of the Nuna9 vehicle was done by the team at the Polymer Science Park in Zwolle, next to the AOC R&D Center. “AOC supported the Nuon Solar Team with innovative composites application technology, and provided hands-on support in manufacturing”, comments Paul Vercoulen, CTO of AOC. “The construction is stiffer, stronger and lighter compared to previous Nuna versions, which means a faster, safer and more energy efficient car.”

The Nuna9 has been made with Beyone™ styrene-free resin systems used in combination with TeXtreme® carbon fabrics (supplied by Oxeon). These sustainable Beyone™ resins feature close-to-zero smell and solvent emissions, and are environmentally preferred alternatives to conventional styrene-based resin systems. The result is a superb Nuna9 vehicle that combines light weight, great aerodynamics, and dimensional stability at elevated temperatures.