Back to blog overview

The Atlac® name is synonymous with corrosion resistant composites. Even before the Atlac® brand was officially registered in the early 1960s , these powerful resins were proving their ability to withstand the most challenging chemical environments across a broad range of industries. Customers worldwide have discovered that composites based on Atlac® resins provide longer lasting, more cost-effective solutions than specialized corrosion-resistant metals and alloys in processes where safety and continuity of operations are crucial.

A brief history of Atlac®

In the 1950s the Atlas Powder Co in Wilmington, Delaware, USA, developed a new class of Unsaturated Polyester resins with outstanding chemical resistance. The polymer backbone was based on propoxylated Bisphenol A reacted with fumaric acid to form a solid, powdered resin and was sold under the brand Atlac®. Users dissolved the powder in styrene to turn it into a liquid that was easy to process. Various products were developed, but the most widely used was Atlac® 382, a versatile, general purpose resin. Meanwhile, in Europe, BASF developed similar resin formulations during the 1960s, which were sold under the Palatal brand for anti-corrosion applications.

Offering superior levels of chemical resistance to conventional construction materials, the resins were used to manufacture process equipment such as composite tanks, where they were also better at dealing with stress corrosion than standard unsaturated polyesters. The introduction of filament winding in the 1960s boosted their use in pipes. BASF successfully employed the resin in its Chlorine production plant to handle highly corrosive caustic soda, which later led to its introduction in pulp and paper, and metal processing/mining facilities around the world. 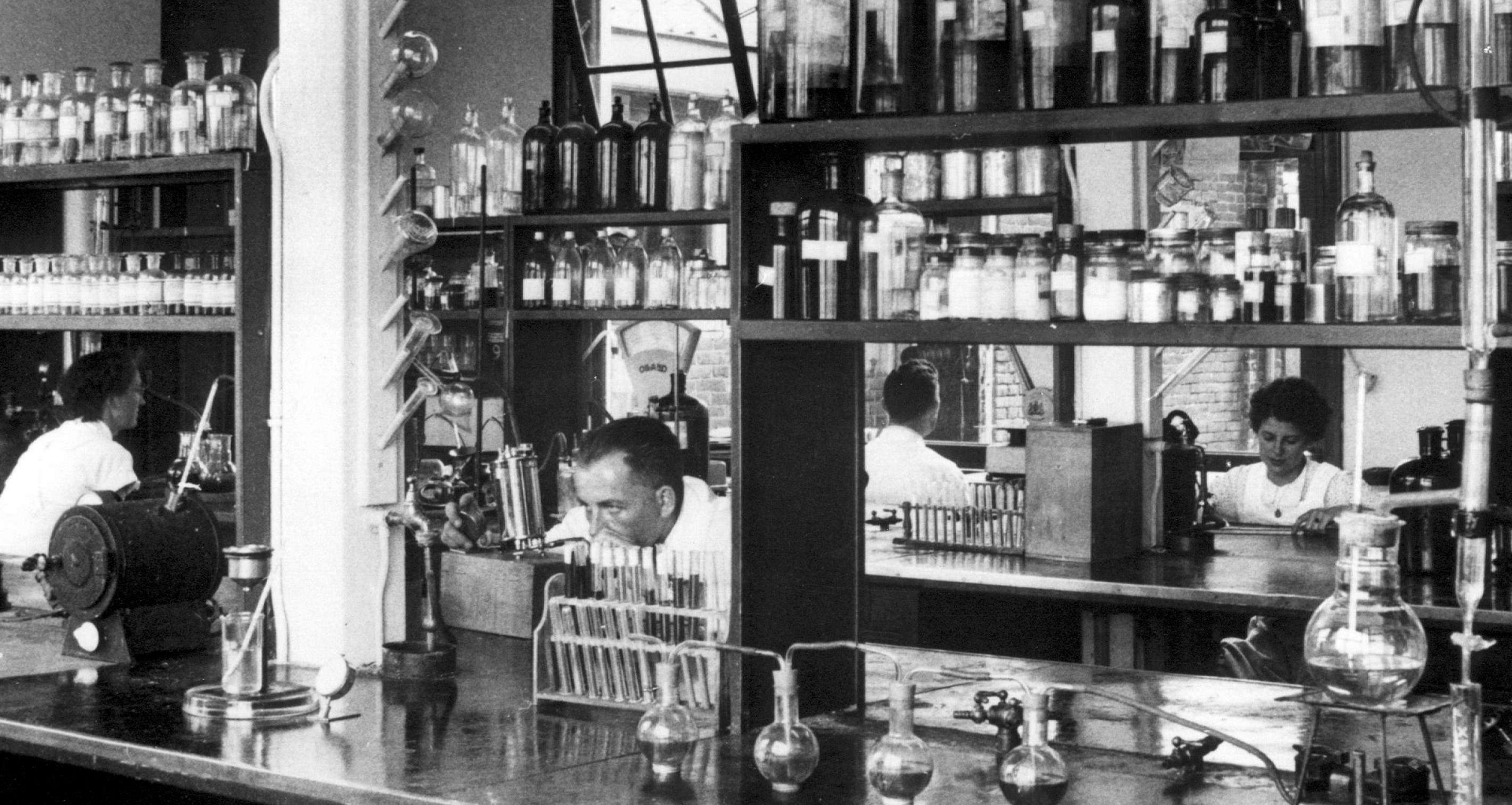 AOC laboratories in the 1950s

Vinyl Ester resins were developed in the early 1970s. Although these use a different chemistry, the backbone of the molecule was the same base chemical (Bisphenol A) that made Atlac® so successful. After ICI acquired Atlas Powder Company in 1971 they produced the next generation of Vinyl Ester resins. At the end of the 1980s, ICI sold the European Atlac® business to DSM Resins, where a higher performance Vinyl Ester was developed, called Atlac® 590. In this polymer an Epoxy Novolac backbone was used, resulting in better solvent resistance and a very high heat deflection temperature, opening up new applications in high temperature processes such as flue gas desulfurization.

In the mid-90s, DSM and BASF combined their activities in the field of unsaturated polyester technology under the name DSM Composite Resins and BASF’s Palatal products were renamed Atlac.® During the ‘90s a higher emphasis on process reliability in order to minimize costly downtime continued to drive the use of Atlac® resins.

Major chemical companies have been successfully using Atlac® resins already for decades. BASF's experience with Atlac® at its Antwerp site, with more than 50 production facilities, dates back to the early 1980s. The resin was then used in composite pipes for the transport of brine to a chlorine factory. Because of the good experiences obtained, the resin was then used in several other applications.

Today, the company mainly uses Atlac® 430 in composite pipes for transporting cooling water to the various production units on the site. Brackish water from a nearby harbor dock is distributed throughout the site via concrete-lined underground steel pipes with a diameter of 2 m. The brackish water is then distributed to heat exchangers via composite pipes, with a diameter of 500-800 mm. In this primary heat exchange cycle, process heat from the process water is transferred to the cooling brackish water. The process water then acts as a coolant for the process media in a secondary exchange loop.

The Atlac® pipes are perfectly resistant to brackish water, while steel or stainless steel pipes would corrode quickly. In addition to pipes, Atlac® 430 is also used for coating metal devices and components, making them chemically resistant to various chemicals. Atlac® resins provide BASF with the proven performance, reliability and ease of use it needs. Resin application is also simple and robust, while it can be used for many applications.

Performance and reliability into the future

Today, Atlac® is a leading AOC brand for Anti-Corrosion in Europe and Asia, following the 2018 merger of Aliancys with AOC. In the Americas, the AOC Vinyl ester resins used in anti-corrosion applications are marketed under the Vipel® brand. “AOC will continue to advance the Atlac® range to answer evolving industry needs, while maintaining the highest levels of product performance, quality and consistency that our customers rely on,” comments Luuk Groenewoud, Market Segment Leader Anti-Corrosion of AOC EMEA.

“With our comprehensive Chemical Resistance Guide our customers can be confident in selecting the best resin for their specific process conditions. For special cases, where the Guide is not sufficient, our teams around the globe provide customized resin advice based on our Chemical Resistance Information System (CRIS) and extensive technical expertise in the corrosion resistance market. We look forward to building on Atlac®’s impressive 60-year track record and to partnering with our customers to continue the fight against industrial corrosion.”

Trusted Solutions | AOC ← About Us ← Blog ← Atlac® resins: Combating corrosion for over 60 years