NunaX Will be Sailing on the Australian Wind

Earlier this month, the Vattenfall solar team unveiled its latest solar car, the NunaX. The tenth solar car made in Delft is not only smaller, lighter and more efficient, but comes with a secret weapon: the car is designed to use the wind to gain more speed. AOC provided hands-on support during vehicle manufacturing and supplied Beyone™ styrene-free resins for making construction and shell.

After more than a year of design and construction, it is finally finished: NunaX, the latest self-built solar race car from the Vattenfall Solar Team. This is a milestone for the team members, all of whom are students at Delft University of Technology and are putting their studies on hold for at least 18 months to participate in the Bridgestone World Solar Challenge in Australia. On July 16th the car was presented at a celebratory event at the Amsterdome in Amsterdam.

With the new NunaX, the student team is hoping to win the world title for the eighth time at the Bridgestone World Solar Challenge in Australia, to be held in October.

Although the Vattenfall Solar Team has already won the solar racing world championship seven times, the challenge is as great as ever. Technical Manager Bruno Martens: "The rules for solar racing have barely changed in recent years. In the earliest races, the cars were sometimes very different, but we are seeing now that teams copy each other and the cars look more and more alike. This makes innovation more important than ever – the smart touches make the difference.”

Energy from Both Sun and Wind

Fortunately, innovation is in the DNA of the Vattenfall Solar Team. In the previous edition, the students from Delft won thanks to an innovative smaller car, and the expectation is that many competitors will follow suite this year. The team members from Delft have managed to make their new car slightly lighter, smaller and more efficient than before. Weighing just 133 kg, it appears to be the smallest and lightest car ever. A small wing has also been attached to the car, positioned to allow the panels on the wing to catch as much sunlight as possible.

The team's main hope centres around the aerodynamic design. Bruno: "During the previous race, we discovered that the small Nuna9 benefited enormously from the strong side-wind that we always have in southern Australia. It's a little like the way a sailboat is driven by the wind. For this edition, we have given specific attention to this in our design. The canopy and the wheel shrouds are shaped to give the car a sort of extra push in a side-wind. For this car, we are using both solar energy and a little bit of wind energy."

Team up for Making a Great Car

The construction of the NunaX vehicle was done by the team at the Polymer Science Park in Zwolle, next to the AOC AOC R&D Center. “AOC supported the Vattenfall Solar Team with innovative composites application technology, and provided hands-on support in manufacturing”, comments Paul Vercoulen, CTO of AOC EMEA. “The construction is stiffer, stronger and lighter compared to previous Nuna versions, which means a faster, safer and more energy efficient car.”

The NunaX has been made with Beyone™ styrene-free resin systems. These sustainable resins feature close-to-zero smell and solvent emissions, and are environmentally preferred alternatives to conventional styrene-based resin systems. The result is a superb NunaX vehicle that combines light weight, great aerodynamics, and dimensional stability at elevated temperatures.

Getting Ready for the Race

In the next few months, the team will focus on the race process and perform an extensive series of tests. The students are being assisted in this by former hockey coach Marc Lammers. The first tests will take place in the Netherlands. In August, the team members and their solar car, NunaX, will travel to Australia to perform tests and preparations on site. 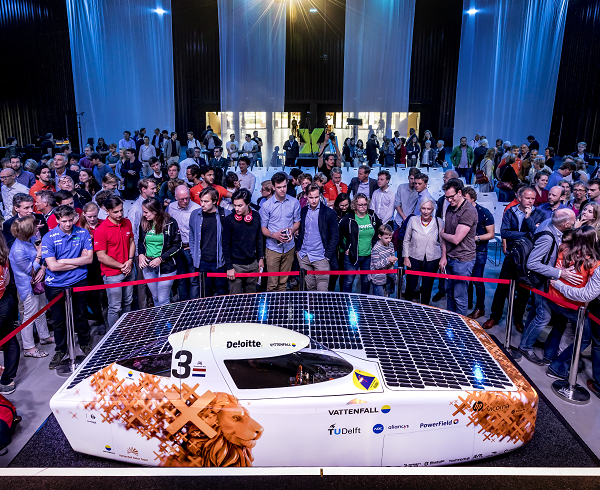 NunaX is the smallest and lightest (133 kg) car yet, and – unless a competing team submits an even lighter car – the lightest car ever to participate in the solar race.

To save weight, every part of the car has been redesigned. The team used different basic materials for some of them, and for others they removed material. In some cases the difference is only two grams, but every gram counts.

The car is highly streamlined – the outside mirror of a normal passenger car has more wind resistance than the NunaX.

The solar panel consists of gallium solar cells, which are normally used in the aerospace industry. They are much more efficient than the silicon cells on building roofs.

Instead of the usual layer of glass normally used to protect solar cells, the team will apply its own protective coating to save weight. The coating also contains prisms so that the light shining on the solar cells is always perpendicular.

In October of this year, the Vattenfall Solar Team (formerly the Nuon Solar Team) from Delft University of Technology will participate in the Bridgestone World Solar Challenge in Australia – the world championship of solar racing – for the tenth time. This race takes place every two years.

The Bridgestone World Solar Challenge is a multi-day race over a 3,000 kilometre course through the outback of Australia. Solar racing teams from all over the world participate and try to reach the finish as fast as possible.

A new team composed of 16 students from Delft University of Technology is assembled every year, and they design and build the car and then race it.

The team has already won the race in Australia seven times. On two occasions they finished second. The team also won the Sasol Solar Challenge in South Africa three times.

A new Vattenfall Solar Team is formed every two years, consisting of sixteen ambitious students from the Delft University of Technology who interrupt their studies for at least 18 months to participate in the Bridgestone World Solar Challenge.